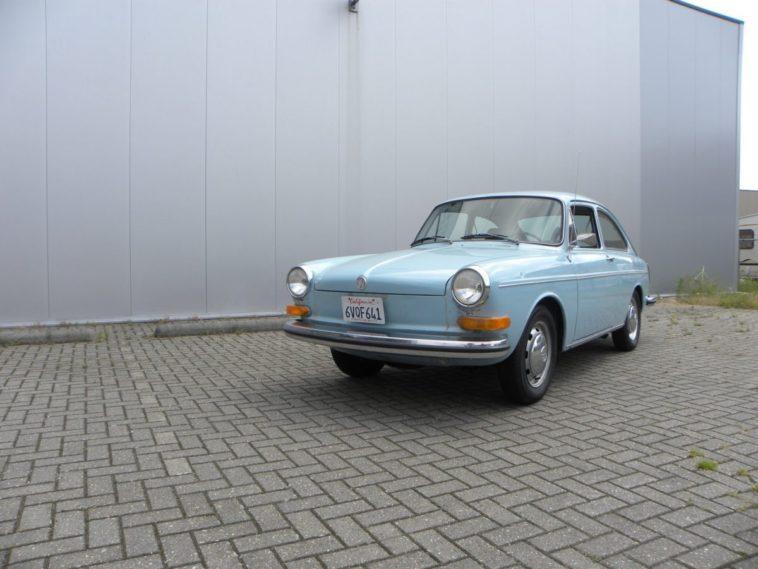 A VW TL 'Fastback'? That was my first car. I bought it from the mechanic where my father's 1501 Break was servicing. As a conscript soldier I paid 300 guilders for it. And a good driving TL for 150 euros? It is not going to be that for him anymore.

To see such a VW TL at a Ford Mustang specialist is surprising. With its standard 54 hp, it is of course no match for the real American Steel in Harrie company, but 'enough is enough'. And that about 54 hp? These are fed by a Bosch D-Jetronic injection. The 1600 was therefore only available in the States in 1967, but later also in Germany and the surrounding area. The 1600 LE (inspritzung) thus created was thus a pioneer in the field of injection. The VW was the first German series-produced car with fuel injection.

VW TL, the dream successor of the Beetle

The Volkswagen Type 3 (sold as Volkswagen 1500 and later Volkswagen 1600) was Volkswagens dream successor to the Beetle and offered more space and luxury than that legendary, but already dated, Beetle. In terms of technology, this series was still Beetle based. But characteristic differences were the torsion bars twisting across the full car width and the subframe that carried the drive. The Type 3 was built from 1961 to 1973. The Fastback was presented before 1965. Before its time it was a full 4-5 person car. This new, large VW was for sale as a sedan, as a fastback and as an estate car. The cars were delivered with 1.500 and 1.600 cc engines.

Of course with air-cooled boxers

And those engines were, of course, air-cooled four-cylinder boxers. It took quite a long time for classic enthusiasts to get their hands together for this series of Volkswagens, which have been sold millions of times. Now that interest is growing, it is noticeable how few Type 3's are left. The conservative buyers bought the 'Pontons', the sedans. The practical thinkers went for the Variant (called 'squareback' in the US). That station wagon version was the top with about 43,5% sales share. It was also delivered behind the driver without side windows.

The experience and the accountant

The 1500's and 1600's, like Beetles, were driven by cost and experience considerations, powered by a rear-mounted air-cooled four-cylinder boxer engine. With a displacement of 1.493 cc and 1.584 cc, which in carburettor version delivered 45 and 54 hp respectively. As an injector, he delivered the same power. But he needed less gasoline for it. From 1967 there was a choice between a manual four or automatic 3-speed gearbox.

By maintaining the Beetle concept - including the wheelbase - Volkswagen had a large mid-range in the range with this low-development model, with the Ponton and VW TL versions offering luggage space under both the front and under the tailgate. Those luggage compartments may not have been too high, but still… The reborn boxers had their fans on the crankshaft. Therefore, the construction height of the motors was very low (approx. 48 cm). The nickname 'pancake block, pancake engine or trunk block was soon born. The fact that the technicians devised a well-functioning cooling system for such a 'packed' engine is worth a compliment. In terms of cooling, the T3 with its flat-lying oil cooler avoided a notorious Beetle ailment: the third cylinder lost its tendency to overheat.

Other than a Beetle, better

Such a Type 3 drives very differently than a Beetle. The other torsion bar suspension and the angled rear wishbones make the ride in these Volkswagens much smoother. In addition, the VW feels 'big & mature'. For a modern 'fullsized' Dutchman, a Beetle is often a somewhat tight housing. This Fastback really feels like an 'automobile'. And you look out over a nice long nose. That's always fun. In September 1968 the T3 got this longer nose. He looks good on him. And that the abbreviation TL (Touren Limousine) was popularly called 'Traurige Lösung' or 'Traurige Linie'. Well, just look at the most recent Opel ad: "We Germans have no humor ..." They say it themselves.

We publish these articles for free, and of course want to continue to do so. But you understand that it is not free for us. Do you support and appreciate this initiative? Then consider one subscription to Auto Motor Klassiek. Not only will you help us keep the free initiatives affordable, but you will also receive an AMK on the bus as a bonus. And you only pay € 3,30 per song instead of € 4,99. Good for hours of reading every month.
ShareTweetSubscribe for free
If you like the article, do you also share it?

Give a reaction cancel reply

Auto Motor Klassiek is a monthly issue about classic cars and motorbikes. With the most comprehensive section every month vintage cars for sale, all the news you can imagine and interesting articles about classic cars and motorbikes, practice and technology. Single numbers cost € 4.99. A subscription only costs € 39,50 per year. Subscribers spend € 26,50 cheaper every year. In addition, as a subscriber you can advertise for free (see conditions) and you have Auto Motor Klassiek almost a week earlier in the house.